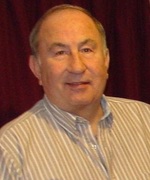 Gale V. Hamilton, age 78, of Wooster, entered into rest Monday, December 30, 2019 at Summa Akron City Hospital following a brief illness. His family was by his side.

He was born on December 6, 1941 in Mansfield, to Raymond Welker Lorena (Chenevey) Hamilton. He graduated from Smithville High School in 1959.

Gale married "Zee" Lester on January 4, 1964 in Wooster. She survives.

He had previously owned and operated Hamilton's Gulf Station for over 20 years in Ashland and then worked for AVI Foodsystems Co. of Wooster for 17 years before retiring in 2007.He was an avid car enthusiast who also enjoyed going to car shows and was a member of "UFO" United Ford Owners club for many years and also enjoyed drag and NASCAR racing. He was a devoted Ohio State Buckeye fan. Gale adored and loved spending time with his family and especially his grandchildren and great grandchildren. He also loved spending time with his son and were inseparable.

In addition to his parents, he was preceded in death by his son, Edward "Eddy" Hamilton and his 2 brothers, Kent & Harlan Hamilton.

Services will be Saturday, 1:00 p.m. at Custer-Glenn Funeral Home in Wooster with Rev. Dr. Brent Durham officiating. Burial will follow at Sherwood Memorial Gardens in Wooster where military honors will be conducted by the 555th Honors Detachment.

Memorial contributions may be made to the Wounded Warrior Project, P. O. Box 758517, Topeka, Kansas 66675-8517 or at support.wounded warrior project.org.

Words of private or public condolences may be shared with the family at: www.custerglenn.com