To share your memory on the wall of John Albright, sign in using one of the following options:

John was born on November 8th, 1925 in Denver, Colorado, to Cedella Joyce Albright (née Fischer) and Arden Frederick Albright, of Wooster. The family soon returned to Ohio, which he would call home for the rest of his life. He had two sisters, Doris (Dot), and Patricia (Pat), and two half sisters, Linda and Susan.

On March 12, 1947, John married the love of his life, Margaret “Peg” Haueter, of Orrville. They honeymooned at Niagara Falls, raised five boys together, and celebrated 70 years of marriage before Margaret’s passing in 2018. After serving as a turret ball gunner in the Air Force, John took over the radiator part of his father’s business, Albright Radiator and Welding. John and Peg also later ran the Albright Antiques Shop in Smithville. In 1982, John survived a major heart attack. Doctors gave him only a few months to live, but with Margaret’s tireless care, he lived another 37 years.

John was industrious, loved working with his hands, and was deeply dedicated to providing for his family. He worked alongside his sons at Albright Radiator well into his 80s, at times walking through blizzards to get to the shop, or to fix the radiator on a city snowplow. He was known for a quiet compassion, and rarely turned people away for lack of funds. He loved taking long walks, hunting morels, and feeding birds. He liked to carry his own spoon so as not to use plastic ones, and a pack of lifesavers to hand out to his many grandchildren.

We are comforted to know he’s reunited with his beloved wife, Margaret, and eldest son Frederick, who passed away in 2017. He is survived by his sons and daughters-in-law Jerry & Mindy Albright, David & Joanne Albright, Scott & Cindy Albright, Hans Albright & Terry Owens and Fred’s longtime partner Kathy Beall. He is also survived by his grandchildren Franz, Emil, Ewen, David S., Joseph, Jonlyn, Jessica, Kara, Krista, Micah, Katrina, Nathan and his 11 great-grandchildren. We miss him dearly and will always love him.

A private memorial will be held for the family at a later time.

Words of comfort may be shared at www.custerglenn.com.
Read Less

There are no events scheduled. You can still show your support by sending flowers directly to the family, or planting a memorial tree in memory of John Arden Albright.
Plant a Tree

We encourage you to share your most beloved memories of John here, so that the family and other loved ones can always see it. You can upload cherished photographs, or share your favorite stories, and can even comment on those shared by others.

Posted Sep 16, 2019 at 09:04pm
Dear cousins, My heartfelt sympathy on the passing of your dear Dad. It is so hard to say good bye to our parents and especially when they are both gone. Your Mom often mentioned your family gatherings, and you have been through some difficult times together, and that is the key, your support of each other. Your parents left you with a wonderful legacy of dedication and family loyalty. They were such a strong couple, so committed to each other. I have good memories of going to the antique shop, that was always a special treat, family reunions and visits to your home on Cleveland Road, especially that little pond in your back yard.
Your dad was a quiet man, like my dad, hard working and a good provider for his family. Although our parents are gone, the example they left lives on in us and we can remember them with thankful hearts for all they did for us and the sacrifices they made on our behalf. We can cherish the memories and realize what a blessing our parents were. Remembering you with love and prayers ,your cousin, Amy Nussbaum.
Comment Share
Share via: 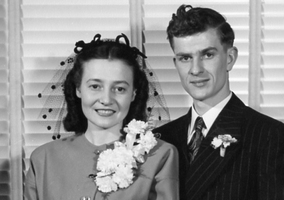