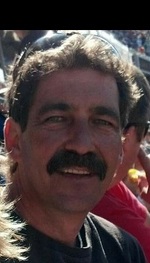 Mike was born on October 2, 1960 in Barberton to Donzel and Muriel (Lindeman) Robinson and attended Wadsworth Public Schools.

He married Denise Lindley on November 7, 1987; she survives.

Mike was a retired union carpenter with 30 years of service, and was a Project Superintendent for the AP O'Horo Construction Company for the last 20 years of his career.

He was well respected for his skills in the trade, leadership style and work ethic.

Mike had been an avid outdoorsman enjoying deer hunting, fishing, and camping and shared his enthusiasm with his children and granddaughter.

Mike also enjoyed cooking and watching football. He was a devoted Brown's Fan.

In addition to his parents, he is preceded in death by his father and mother-in-law, Kenneth and Sharon (Deyo) Lindley; brothers-in-law, Rick Small and Mike Lindley.

A memorial service will then follow at 4:00 p.m.with Pastor Don Bolich officiating.

Words of condolences may be privately or publicly shared with the family at: www.custerglenn.com.

Remember the best times, the laughter, the song, remember the good life I lived when I was strong.