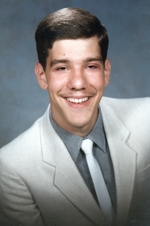 Robert L. Thompson, age 50, of Wooster, entered into rest on Thursday, May 7, 2020 at Wooster Community Hospital following a brief illness.

He was born in Barberton, Ohio on October 24, 1969 to Robert Lee and Marti H. (Nelson) Thompson and had lived in Wooster almost his whole life.

He attended the Kingdom Hall of Jehovah's Witnesses in Wooster since 1972 and was baptized in 1989.

"Robert loved cowboy boots and NASCAR. His greatest love was for his God, Jehovah,and talking with others about Jehovah, his Kingdom and the paradise earth including the hope of the resurrection. He believed and
looked forward to the fulfillment of the scriptures, in particular Isaiah 33:24 no resident will say he is sick; Revelation 21:3, 4 death will be no more; Acts 24: 15 a resurrection of both the righteous and unrighteous.

Any that knew Robert recognized he had a big heart and would help anyone if he was able to. He struggled with multiple chronic health issues his entire life but he did his best each day. Lately with severe limitations, he still found ways to speak with others about Jehovah and still had the desire to help.

Robert is survived by his mother, Marti Thompson, with whom he lived all of his life."

There will be no public services or calling hours. A private interment has taken place at the convenience of the family.

A private or public video or tributes may be shared with the family at: www.custerglenn.com.