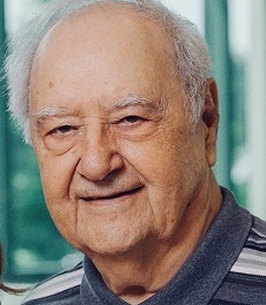 William "Bill" D. Voliotes, age 90, of Wooster, passed away, Tuesday, October 2, 2018 at Life Care Hospice in Wooster following a period of declining health. His family was by his side.

Bill Voliotes charmed his nurses for the last time early in the morning on October 2nd, 2018 and joined his parents and siblings in the afterlife.

“Billy” to his wife and “Barnacle Bill” to many others, Bill lived a full life on his own terms. Born the son of Greek immigrant parents in New Hampshire in 1928, he was very proud of his heritage. He loved to speak the language, cook the food,and drink the spirits of his family’s homeland.

Bill was an ambitious man and hustled for himself and his family. Whether it was backing up Mel Torme on his saxophone, or riding a newly acquired race horse through a night club in Connecticut, Bill always found a way to have a good time. Bill won big at a racetrack and used the money to buy and operate his own corner market for several years. Bill eventually set his sights on sales, and became one of the most successful real estate franchise salesmen on the east coast.

Eventually Bill’s career led him to be a general manager at Wilbar’s department store where he met the love of his life, Carole, whom he had the good sense to marry in 1974. Bill and Carole’s journey would take them up and down the east coast until they gave birth to their daughter, Nicole. The family settled in North Carolina, where Bill would retire a few years later.

Though Bill retired, he never stopped adventuring, never failed to take advantage of a good deal, and never missed a chance to spoil his daughter by feeding her horse addiction. In 2007, Bill got the opportunity to spoil his grandson, Dominic, and moved to Ohio with Carole. Bill loved to go on adventures and play baseball with Dominic as much as his health would allow, and also spoil him with more homemade fudge than any reasonable adult should permit.

Bill’s health declined steadily over the last few years of his life, but he was too ornery to let it slow him down and keep him from doing the things he loved: eating what he wanted to, encouraging the adoption of a more than normal amount of cats, yelling at the TV because he could and single handedly keeping QVC afloat.

“Popou” will be missed by his wife of 44 years, Carole, daughter Nicole, son-in-law Brandon and grandson, Dominic. The family plans to celebrate Bill’s life the way he lived, on his terms. There will not be a public service, but anyone wishing to make a contribution in his name to Life Care Hospice, 1900 Akron Rd. in Wooster, is encouraged to do so.

Custer-Glenn Funeral Home in Wooster is privileged with serving the family.

Words of condolences may be shared with the family either privately or publicly at: www.custerglenn.com.


To send flowers to the family of William D. Voliotes, please visit our Heartfelt Sympathies Store.

We encourage you to share any memorable photos or stories about William. All tributes placed on and purchased through this memorial website will remain on in perpetuity for future generations.

So sorry for your loss. We have such fond memories of Bill. May the memories you shared as a family bring you comfort during this difficult time.

AF
Dear Carol,
We’re so sorry about Bill. 44 years of shared life is remarkable. Our thoughts and love are with your family.
Love, Art and Anita
Art and Anita Francisco - Tuesday October 09, 2018 via Condolence Message
Share This:
1
Page 1 of 1
Share
×

Thank you for sharing!

Or use your email:

Connect with families at their time of loss. By subscribing to email updates, you will receive two daily updates containing all new stories, photos, candle lightings, condolences, and more.